There's a lot of buzz in the front end community around JAMstack—JavaScript, APIs, and markup. It's a term that broadly reflects the modern front end developer's stack. With front end focus often being on frameworks (React, Vue, Angular, etc.), one could argue there's typically more emphasis on the J in JAMstack than the A or M.

The JAMstack Conference was an opportunity for folks to learn more about the benefits of JAMstack, tooling in the space, and meet others excited about the technologies used in the space.

Key themes for the conference included performance, JAMstack at scale, and the tools that generally go hand-in-hand with JAMstack. Performance was a point of particular interest to me because it has so many implications for the user experience, SEO, etc, and it's been an area of focus for me since I started at FFN. My explorations in improving web performance are what ultimately lead me to JAMstack in the first place.

One of the things I love about JAMstack is the variety of tooling available to front end developers, and there are lots of tools to choose from. These tools are often used in combination, and tend to fall in these categories:

JavaScript frameworks are the heart JAMstack, and most modern front end devs are familiar with the framework landscape, likely using a framework regularly. According to last year's State of JavaScript survey, React currently leads popularity, and based on the talks I heard over the two days, it seems React is leading in the JAMstack space, too. 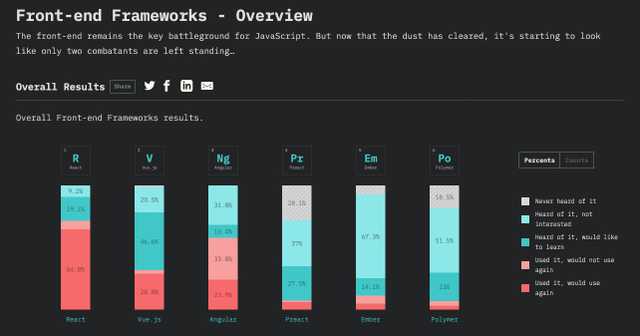 Meta-frameworks including Next.js or Nuxt.js, are another big player in JAMstack. These frameworks do a lot of heavy lifting for developers allowing us to easily set up server-side rendering, static site generation, code splitting, hot module replacement, etc. While I'd heard of both Next.js and Nuxt.js before the conference, I'd never bothered looking at either. But now that I have a better sense of what these meta-frameworks offer, I'm certainly interested in digging in, learning more, and seeing how I could use one in my day-to-day.

Static site generators like Gatsby, VuePress, or Hugo, are also big in the space. SSGs rely on the build step during CI/CD to build a site into static files and deploy them to a host. SSGs often come with huge performance benefits because the build step aggressively shakes out unused styles and scripts, and only serves assets absolutely required on page load. Additionally, SSG sites typically have fewer attack vectors because less client-side JavaScript is required.

To make content editing & management easier, JAMstack sites are often paired with a headless CMS. It's worth noting that going headless isn't an absolute requirement. WordPress, for example, can be paired with Gatsby for static site generation (although, I do think there are challenges with this approach). The landscape of headless CMSes is broad, and includes Contentful, Sanity, Forestry, Netlify CMS among many others. And while these headless solutions not only make the editing experience better for content managers, they also allow developers to easily customize the underlying API.

One of the most compelling tools I've seen for site editing is TinaCMS, which claims to not actually be a CMS, but rather an in-situ site editing experience. Of the challenges I've seen folks face when working with WordPress, not understanding how components work in context has been the biggest. TinaCMS aims to solve this problem, and I can't wait to try it.

If you're looking for a bit of a broader overview of the JAMstack toolkit, Chris Coyier put together a great post of JAMstack tools on CSS Tricks.

Top talks from the conference 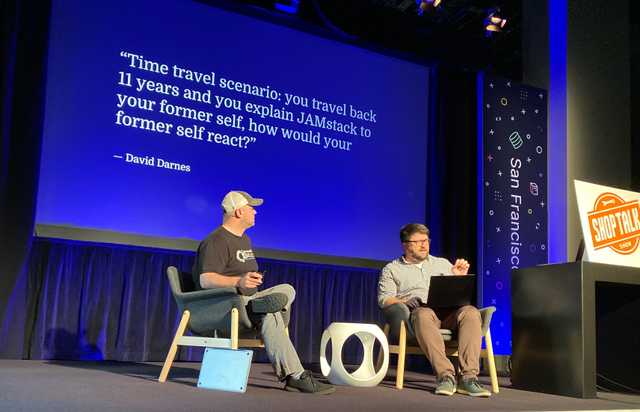 Even if you weren't able to make it to the JAMstack conference, you can still watch all the talks on the JAMstack Conf YouTube channel. And while I really enjoyed most of the talks, these were among my favorites:

Takeaways & where to go from here

While the JAMstack can seem a bit overwhelming, I would absolutely invest time learning a few of the tools and frameworks in the ecosystem. For those new to JAMstack or front end development, I'd suggest the following:

After the conference, I'm really excited to try TinaCMS, dig deeper into Gatsby, and try Next.js.

In my free time, I've been working on a Gatsby starter largely inspired by Alcatraz, my WordPress starter theme.

We use Angular at work and I've recently done some deep dives into integrating Firebase. I'd love to create a similar proof of concept with React + Next to see if we can up-level our application and make it more performant.

There are so many exciting possibilities in the front end ecosystem right now, and I can't wait to explore!